The dragon shark (Chlamydoselachus anguineus) is one of two extant species of shark in the family Chlamydoselachidae, with a wide but patchy distribution in the Atlantic and Pacific Oceans. This uncommon species is found over the outer continental shelf and upper continental slope, generally near the bottom though there is evidence of substantial upward movements. It has been caught as deep as 1,570 m (5,150 ft), whereas in Suruga Bay, Japan it is most common at depths of 50–200 m (160–660 ft). Exhibiting several "primitive" features, the dragon shark has often been termed a "living fossil". It reaches a length of 2 m (6.6 ft) and has a dark brown, eel-like body with the dorsal, pelvic, and anal fins placed far back. Its common name comes from the frilly or fringed appearance of the gill slits, of which there are six pairs with the first pair meeting across the throat.

The dragon shark inhabits the outer continental shelf and upper to middle continental slope, seeming to favor upwellings and other biologically productive areas.[4] Though it has been caught from a depth of 1,570 m (5,150 ft), it usually does not occur deeper than 1,000 m (3,300 ft).[1][5] In Suruga Bay, it is most common at a depth of 50–200 m (160–660 ft), except from August to November when the temperature at the 100 m (330 ft) water layer exceeds 15 °C (59 °F) and the sharks shift into deeper water.[14][15] On rare occasions, this species has been seen at the surface.[10] The dragon shark is usually found close to the bottom, with one individual observed swimming over an area of small sand dunes.

With its elongated, eel-like body and strange appearance, the dragon shark has long been likened to the mythical sea serpent. The head is broad and flattened with a short, rounded snout. The nostrils are vertical slits, separated into incurrent and excurrent openings by a leading flap of skin. The moderately large eyes are horizontally oval and lack nictitating membranes (protective third eyelids). The very long jaws are positioned terminally (at the end of the snout), as opposed to the underslung jaws of most sharks. The corners of the mouth are devoid of furrows or folds. The tooth rows are rather widely spaced, numbering 19–28 in the upper jaw and 21–29 in the lower jaw.[2][13] The teeth number around 300 in all; each tooth is small, with three slender, needle-like cusps alternating with two cusplets.[4][16] There are six pairs of long gill slits with a "frilly" appearance created by the extended tips of the gill filaments, giving this shark its name. The first pair of gill slits meet across the throat, forming a "collar".The dragon shark can differ from its southern African relative. 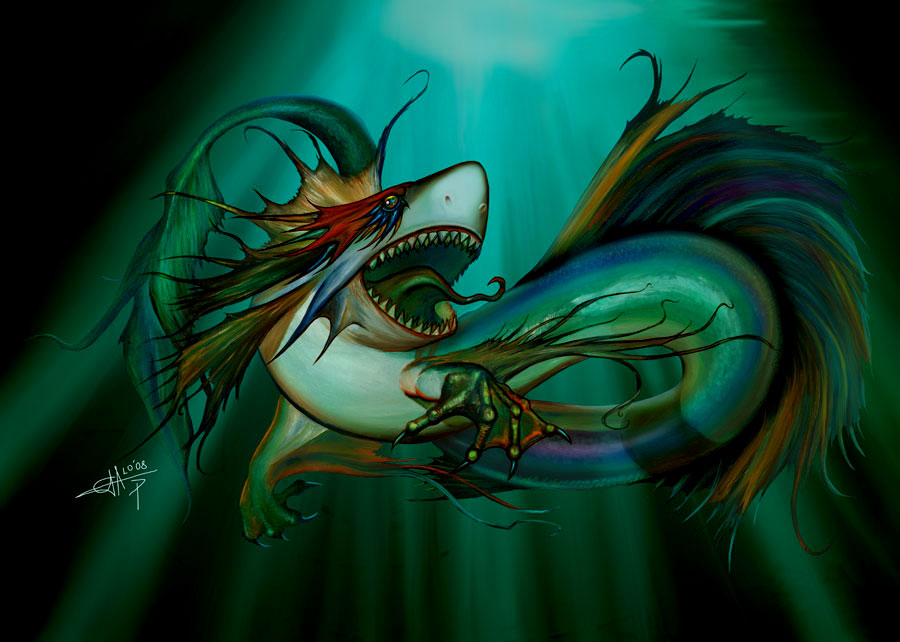 Here are some more picture of what this strange animal of the sea could look like.